I’m no foodie and I never professed to be one.  A foodie would never be satisfied with a picture like this: 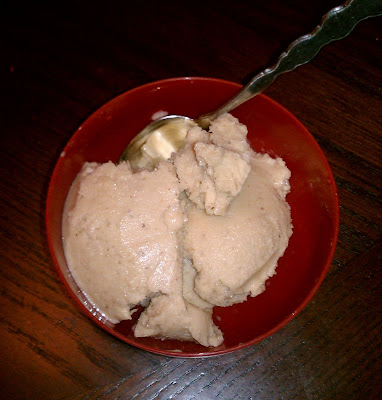 And in hindsight, a little drizzle of chocolate syrup would also have been incredibly tasty.  But, this was my simple bedtime snack last night.
Almost Ice Cream
Ingedient: bananas.
That’s it.
I froze them first (I used three) and then ran them through the blender, and in hindsight, I wonder if I should have blended them and THEN frozen, because frozen bananas are a little bit like trying to run a rock through your blender.  Well, no lasting damage, but it was a loud and difficult job.  And of course the whole time, I’m thinking – Adrianne, only you could screw up a one-ingredient recipe.  But it did work, so I’ll just tell you what I did.  Perhaps a real foodie can perfect it from here.
Once I finally had it blended up, it had taken so long it was more like soft-serve.  So I re-froze it, and then put it in the frig for about an hour to soften (like you would a tub of cool whip).  It passed the scoop test – the texture was actually almost exactly like ice cream.  Score.
The other (and clearly more important) issue – taste.
Well, it tastes like a banana.  Which is fortunate for me, because I actually LOVE bananas.  It clearly lacks the creaminess that makes ice cream, well, ice cream.  If you must have ice cream, this probably won’t cut it… but I will say, it was the best flippin’ banana I think I have ever had.  I’ll definitely make this again!
Have anything Adrianne-proof to share?  I’m always in the market for quick and painless recipes!  Happy Wednesday, mamas!