A couple months ago, One Day At A Time posted about making your own Vanilla Extract.  I will admit, I had no idea you could do this yourself.  And guess what?  It’s crazy easy!! 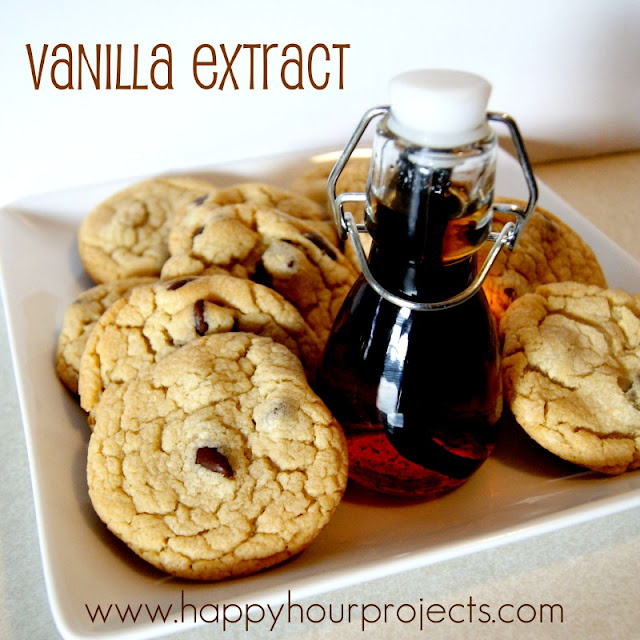 Not only was I surprised that it was so easy, I have to admit, I was even more surprised by how you do it.  I have apparently never read my bottle of vanilla before… did you know most vanilla extracts are 35% alcohol?  I thought, that can’t possibly be true.  So I checked the nearly-empty bottle I have in the cupboard, and what do you know… vanilla, alcohol, corn syrup.
I did some more reading up on just how to make it, and most instructions recommend vodka, though a few suggested that rum would also work.  Very few said you could also use Everclear, but I’m perfectly content to go with vodka… because yes, we generally have it around. :) 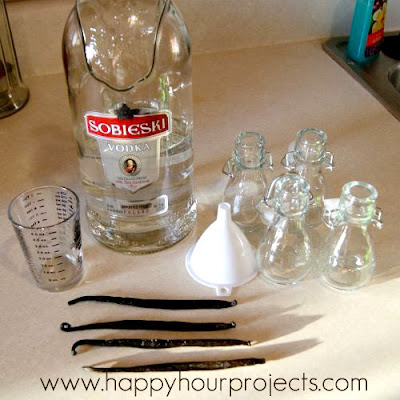 I feel like you can hardly call this a “recipe” because all it requires is putting one ingredient into another and waiting for 2 months.  You should shake it occasionally to keep it from sticking to the inside of the jar, I shake mine about once a week.
The ratio:
1 vanilla bean per 4-6 oz. vodka.
Some commercial extracts also have corn syrup, but from what I can tell, that’s really just sort of “filler”.  So I skipped that and just concentrated on the infusion.
People seemed split as to whether you need “good vodka” for this, or if bottom-shelf works just as well.  I was not going to make a special trip, but I will give you my vodka recommendation: we buy Sobieski in our house.  I cannot believe this stuff is so inexpensive for the quality.  Far better than Absolut, equal to Stoli or Ketel One, and a close rival to Grey Goose… and cheaper than Smirnoff.  Yes, we are vodka snobs.  I am unapologetic about this. ;)
Anyway, while both ingredients are on the expensive side, in the long run it’s much less expensive than commercial extracts.  There are also ways to cut costs.  I ordered my vanilla beans on Amazon, which seemed weird, but it saves a lot of money (10 beans were just under $10, with free shipping).  They arrived well-packaged and from what I can tell, good quality (they were really fragrant and flexible, not brittle at all).  The seller I bought from was Vanilla Products USA, in case you’re wondering… order from wherever you like or buy at the grocery store, but I just wanted to share that I had a good experience using them, personally.
You can use any bottle.  I like these small ones that I found at Hobby Lobby, they have the hermetic hinged lid and the size is perfect.  I’m trying to remember right this moment whether they hold 3 or 4 oz…. it was 2 months ago when I started this project so I can’t recall, but what I will say is I have a good rich color and nice flavor 2 months later by filling it up and using one bean for each jar.
You should either split your bean, or plan on the infusion taking twice as long (4 months instead of two).  The outer skin of the bean tends to protect it more, so the infusion is much easier if you open it up.  I did trim the ends down slightly so that the bean would fit better in the jar.  That also made it easier to split.  I just used my kitchen scissors and cut nearly to the end, making a wishbone shape.  then, I just popped one into each of my jars. 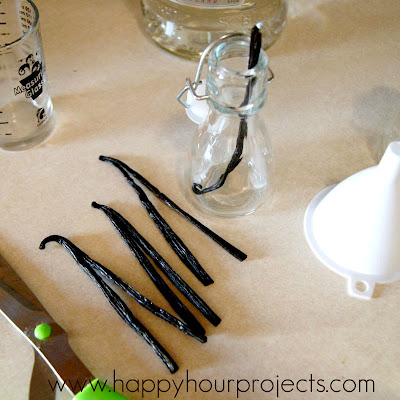 Then, I filled each jar with vodka.  I used a small funnel for this. 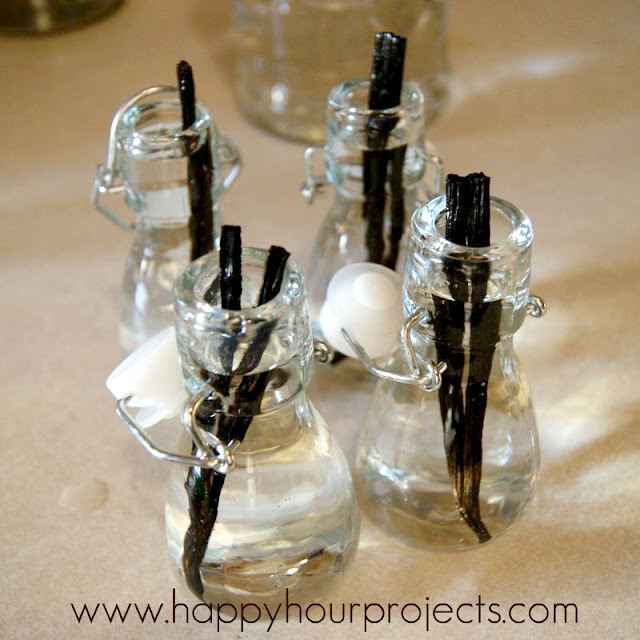 All that’s left is to secure the lids, and store the jars in a dark place for the next 2 months.  It will last much longer than 2 months – but you won’t get your best flavor until at least then.  Some sources I read recommended at least three months, but I tested mine out at two with a batch of cookies, and it was great! 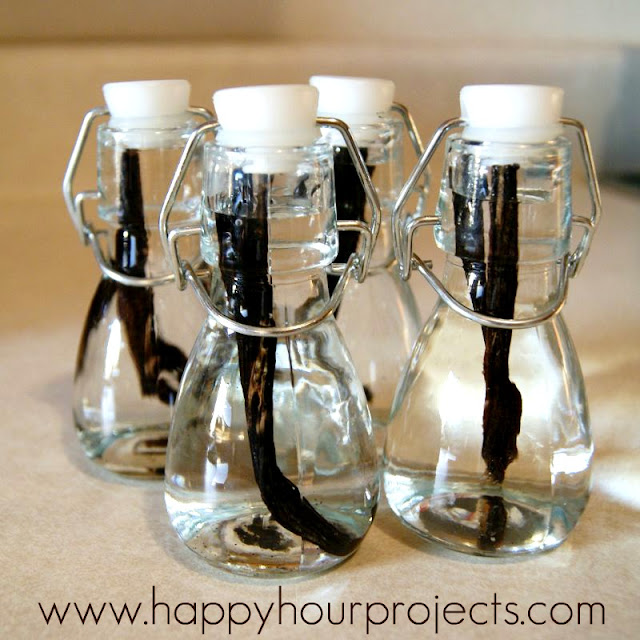 Do shake your jars weekly or so.  Pieces of vanilla bean will start floating around in there, and you don’t want it to settle in just one place in your jar.  If the pieces gross you out, you can remove the bean and strain your vanilla through a coffee filter, but vanilla is totally edible, and the tiny pieces of bean don’t bother me.  Plus, I am gifting these jars, and they look so much more authentic with the bean inside.
I also read that you can refill your jars as you use them, but I assume this would work much better if you’re steeping a larger bottle with several beans.  The places that mention that this works must go through a ton of vanilla, though, because they do recommend replacing the beans every year if this is the route you want to go – sort of a continuous infusion.
Overall – I found that my cookies tasted exactly the same.  I can’t rave that my vanilla is *so much better* than commercial vanilla (though I’m curious if another month would make a difference?) but it certainly worked exactly as well – so I will definitely be going the homemade route from now on!

I link up to these great parties!