Okay, so it’s not much of a “reveal” since Raya is already 8 months old.  But I wan’t blogging back when we put her room together, and I am out of commission for at least a few days recovering from my surgery… but just because I can’t whip up something new doesn’t mean I don’t still have something to share!

First of all, let me introduce you to your tour guide, Raya:

It’s not big, and it’s not fancy, but it was a labor of love while I was cranky and pregnant.  I get a lot of compliments on the block wall, which I painted.

We started with blue walls, which I liked when it was the guest room, but I didn’t want anyone getting the wrong idea about me wishing I were having a boy.  We opted for something neutral, because we don’t plan to be here forever.  And green is my favorite color, so the pregnant lady played the trump card. 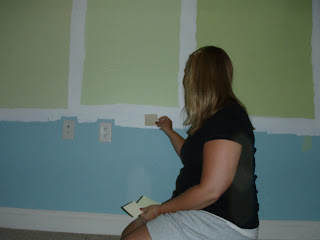 Picking green is hard.  And I am terrible at choosing off the little swatches.  So I bought samples of the greens I thought I would like, and painted big swatches.  6 samples later, I ultimately picked the one in the middle. 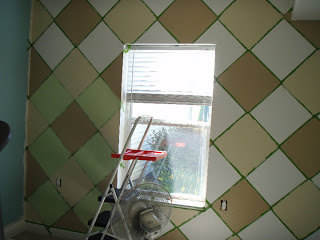 I painted the block wall first.  And it took a lot of coats and a lot of math!  I primed the whole thing white to start fresh.  Then I measured my blocks, marked the corners in pencil, and put up the frog tape.  And for the record – that stuff is amazing!  You still have to ensure you get a nice tight seal, which was tough because our walls are textured.  But a firm press along the edges before painting was plenty.

Then I labeled which blocks would be which color.  Way easier to keep track that way.  I did my browns and then started with the green.  Once they all got filled in, let it dry, peel off the tape, and beautiful block wall!

I would post pictures of the painting process, but as I look back, it seems my dear husband refused to wear pants.  I had forgotten that part.  So you all know what it looks like to paint, without being subjected to, you know, that.

Then I added a little bit of girliness when we settled on a name: 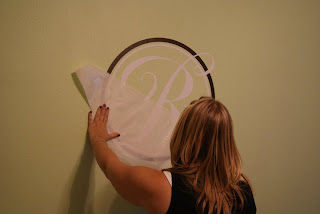 And then we were ready for the once-tiny miss Raya! 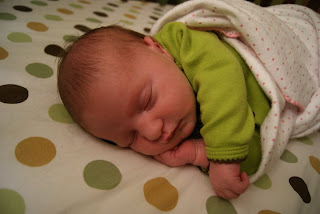 Hope you enjoyed a little reminiscing, and I have to apologize in advance if I don’t get back to your comments right away.  I’m relying on scheduled posting while I recover from my surgery this week! Meanwhile, stop by and register for the giveaway! I have rafflecopter….

I link to these fabulous parties!

I hope you enjoy what you read here, and please be fair when you share!
Previous Post: « Weekend Highlights and Surgery, boo!
Next Post: Easier Than You Think: Homemade Baby Food Basics »