So in my monthly cleaning-out-the-cupboards, I found that we have a lot of jello.  And when you have a lot of something, you feel pressure to find a way to use it.

I have seen a few jello parfaits out there, and I was thinking of making some up for St. Patrick’s Day.  In mentioning it to my husband, he declared that jello would be put to much better use as jello shots.  (I know this makes him sound like an overgrown frat boy, but he’s a bartender by trade, so naturally, he thinks drinks.)

Hmmm… are you thinking what I’m thinking?

Yes, I made jello shot parfaits.  The thing is, I had a little issue rushing my middle layer, so they really weren’t as parfait-like as I would have hoped, but here’s the thing – as much as I really wanted to do these over so that they were perfect, I cannot responsibly spend two days of my life making liquored-up desserts.  So I will show you how mine turned out, knowing full well I rushed a layer when it was setting, and tell you to do it differently.  And even if you don’t – well, you’ll end up with something that still looks like this, at least: 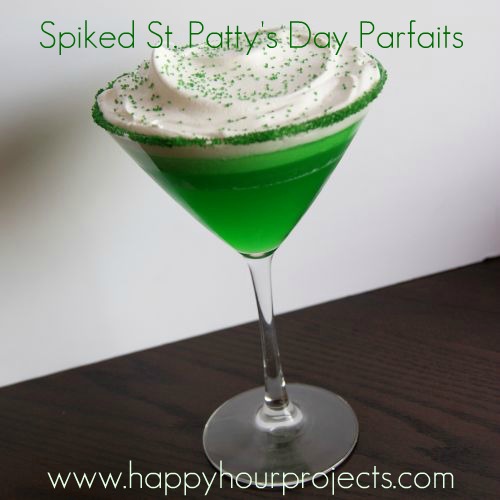 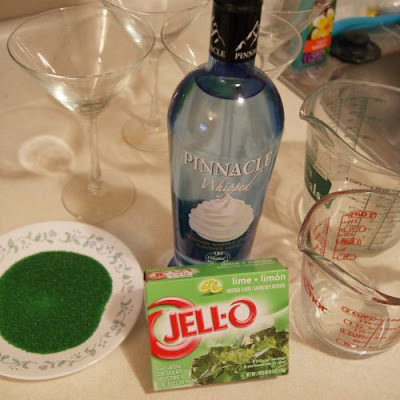 You will also need about 2 hours to make this recipe.  Most of it is time spent waiting around with your glasses in the refrigerator, so it’s a very easy recipe, but more time than I usually spend working on something from start to finish… and clearly, about 15 minutes short of what I should have spend (hey – you live, you learn, right?)

A note – I honestly used one big package of jello, but dividing up my two layers was a *huge* hassle trying to get half to chill and set, while keeping the other half warm enough not to set.  Do yourself a favor and just buy two little boxes, or if you have a kitchen scale, measure your large box out to exactly half and half before beginning.

Now, first things first – because this is a spiked dessert, I am garnishing it accordingly.  Rim your glass in green sugar.  Haven’t done this before?  Get two small plates.  One one, add a little bit of water.  On the other, your sugar.  Dip the glass in the water – it will only wet the rim.  Then, dip the wet rim in the sugar. 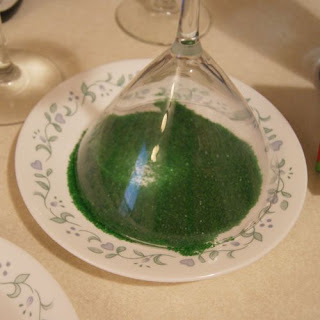 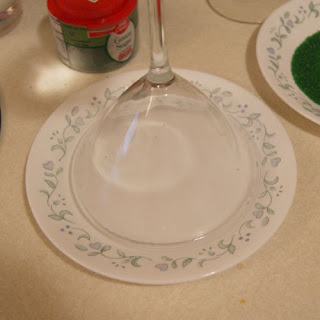 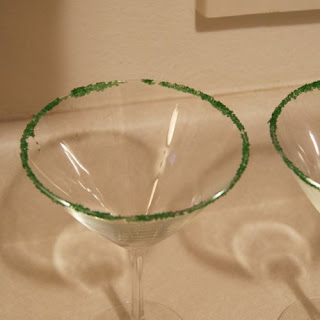 Now, set your glasses aside and prepare one box of jello using the quick-set method.  Because we’re adding vodka (and we’re only using half the amount in the recipe – 4 oz. of vodka is divided between two boxes) it will be slightly different than what the box says.  So, this is how you’ll prepare it:

You want to add your vodka last, because if alcohol gets above 165 degrees, it begins to burn off.  So, your dessert would no longer be spiked. :)

In a bowl big enough to accommodate, pour 3/4 cup of your jello mix, and mix it with half the tub of Cool Whip.  Now, with the remaining jello mix (you should have about 1 – 1/2 cups left), pour equal amounts into your martini glasses.  Stick them in the frig to set.

Wait impatiently for 15-30 minutes until they begin to set.  (Mine took 30 minutes.)  Once they are set enough to add a second layer, take them out and divide up half of your cool whip mixture between the 4 glasses. (Reserve the other half for your next layer.)  Put them all back in the frig to set for at least another 15 minutes 30 MINUTES, because this is where I had my fail.  It seemed set enough in the photo below.  The edges were totally set and the middle was only just a little bit wet when I touched it.  So I tested one out, adding the jello on top, and it looked great!  So I did the rest and put them all back in the frig, only to discover when I checked if the jello was set 30 minutes later – the cool whip layer had come loose and floated up to the top.  Doh. 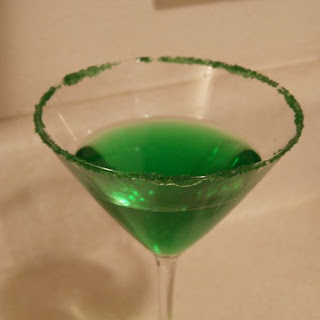 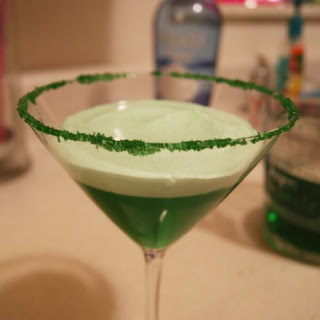 A peek at the original photo will confirm, there’s a ring where my cool whip layer almost set in a most spectacularly perfect way.  Fortunately, it’s an alcoholic dessert, so I consoled myself by eating one.  It was really delicious, so I knew this was a recipe worth pursuing and sharing despite my error.  So, back to layering.

You may also notice my glasses are already fuller than yours – I made some adjustments to how much to pour in for your layers, because when I did it I divided up half and half – for a martini glass, this would make the bottom layer take up much more space that the top layer.  So you’ll be using a bit less so that yours comes out more beautiful than mine.

You can take this time while you wait to prepare your second box of jello exactly like the first one, waiting the same amount of time between adding your next layers.  Chill again, and top with the remaining cool whip mixture.  Then let  that later set.

Just before serving, top with some of your remaining cool whip and sprinkle the top with a little green sugar (or garnish with a lime, or a shamrock, or whatever floats your boat)!   Remember – each of these has a shot of vodka, so indulge responsibly. ;)  Cheers!

I link up to these great parties!
~ Adrianne